Sulis takes place in a fantasy world known as Eao.  Inhabiting the world is a diverse collection of intelligent races, both civilized and not so.  The known world is only approximately 2000 miles across, and knowledge of distant places is often available only second or third hand.  Closer to home, vast underground cave systems and ocean depths likewise remain mostly unknown.

The main story of Sulis takes place in the The Twin Expanse. 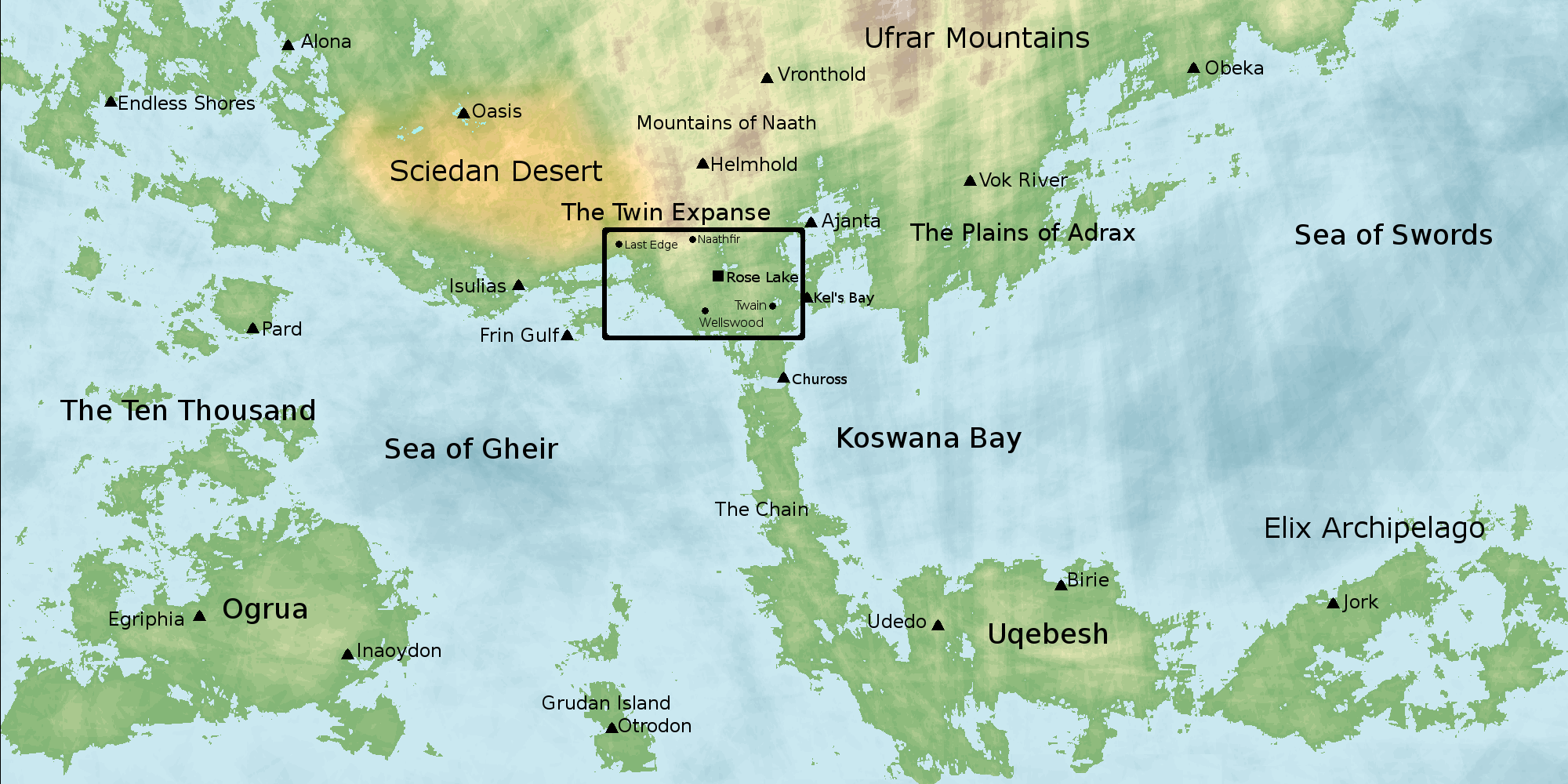 There are six "civilized" races inhabiting the known world.  These are the only races known to form large, permanent settlements and governments.  They are the Humans, Elves, Dwarves, Kimer, Rodians, and Dracon.

In addition, there are numerous intelligent and semi-intelligent "uncivilized" races throughout the world.  Some of these, such as the goblins are present in nearly all corners of the globe, while others, such as the Wolfmen of Grudan are only present in limited locations.

The known world of Eao is dominated by a large continent in the Northern half of the world, known as Eaoder.  This continent is largely dominated by Humans.  In the far North lies frozen tundra and the Ufrar Mountains, original home of the Dwarves and Rodians, while further South is the Sciedan Desert - home of the Dracon, as well as the Mountains of Naath, and the Plains of Adrax.  In between and at the cross roads of these areas is the The Twin Expanse, where Sulis takes place.

To the west of Eaoder are The Ten Thousand, a huge chain of islands ranging from tiny to hundreds of miles across.  To the south is the Sea of Gheir and Koswana "Bay", although it is truly a massive Ocean.  In these regions live the aquatic Kimer.  Between the two Oceans lies the Chain, a massive land bridge stretching for almost a thousand miles, and connecting Eaoder to Uqebesh, a land of forests and mountains, and the Elix Archipelago.

Far to the West lies the continent of Ogrua, home of the Elven people.  It consists almost entirely of one massive jungle, the inner reaches of which have never been explored except by the Elves.

To the East of the known world, the Sea of Swords stretches out for thousands of miles.  It is not known if there are other lands beyond it.  To the West lies the empire of the Xiqui, but of this exceedingly little is known in modern times.  Ancient, pre-Sundering empires likely had more contact with these lands.

Although they will often go under different names, most races and cultures recognize the existence of seven major gods:

There are additionally many lesser gods and spirits, such as the ancestor spirits of the Kimer or the god Xulsigae, worshipped by the Rodians.  Many Elves and Humans considers these gods as mere aspects of one or more of the greater seven.

Magic is a field of energy that permeates all places in Eao.  According to tradition, all magic ultimately originates with the god Sulis.  There are many different magical traditions throughout the world, each approaching the task of controlling and harnessing magical power in different ways.  The most well known and widespread is the system known as the Circles of Magic.  Originally created by the Elves thousands of years ago, the system has since spread to all corners of the world.  Practitioners use a system of highly complex and precise movements, vocalizations, and thoughts to interact with the Weave, the fabric of magic in the world.  These physical actions are attuned to specific spells in the Weave, through centuries of research and repetition.  This allows anyone with the sufficient training and determination to replicate the exact effects of a given spell.

Each Circle of Magic is divided into four parts corresponding to the four traditional elements - Earth, Water, Wind, and Fire.  While the effects from these spells are incredibly powerful, Mages are limited to spells that fit within this system, and thus suffer some inflexibility.  Other magic systems, such as those used by Shamans and Druidic traditions use a more intuitive approach, allowing for the creation of different effects.